RE:  SB 876 (Liu) Right to Rest Bill/Enforcement of Local Ordinances/ Notice of OPPOSITION

I am writing on behalf of our organization to indicate our strong opposition to Senate Bill 876.

Venice Stakeholders Association represents residents concerned about public safety and quality of life in our town.  Venice is the reluctant host to roughly 1,000 transients who permanently camp right next to our residences in several locations in Venice.  With them come extreme and dangerous conditions including trespass, burglary, assaults, home invasions, car break-ins, drug dealing, loud late night noise, harassment, and inebriation, defecation and urination on both public and private property.

Your measure would exacerbate the current “Lord of the Flies” conditions we face by further tying the hands of local authorities, while not helping one homeless person get off of the street.

As I am sure you have noted, the City and County of Los Angeles are poised to allocate hundreds of millions of dollars to programs and housing to address the homeless crisis.  They may well be joined by the State in this effort with a billion or two in bond funds to construct housing for the homeless.

Removing the few remaining enforcement tools available to local police to protect residents from the deleterious effects of transient encampments will have the opposite effect of that which you intend; there will be little incentive or reason for transients to leave their encampments, friends and drugs to accept housing and services.   We know this because outreach staff from reputable homeless-serving agencies have repeatedly offered shelter beds, shared housing, and/or transportation to welcoming and safe family members out-of-state only to be rebuffed by those camping on our sidewalks and parks.  Even during the recent torrential rains there were many empty beds in local shelters.

I invite you to visit Venice and talk to residents and homeless serving organizations. We believe you would conclude that expanding further the rights of the homeless to occupy public space will only compound the problem.

Please find attached my op-ed article from the Los Angeles Times opposing your earlier version of the Right to Rest bill, SB 608, which cites just a few of the egregious crimes which have been committed by transients in our community.  At www.venicestakeholdersassociation.org you can see the numerous assaults and home invasions perpetrated on Venice residents since deranged transient Nathan Campbell, living in his car in Venice, mowed down 17 pedestrians on the Venice Boardwalk with his car and killed a young Italian woman in a rage over being ripped off in a drug deal gone bad.

Enclosure:  When the homeless problem is next door, Los Angeles Times, March 6, 2015


Posted by venice stakeholders at 11:08 AM 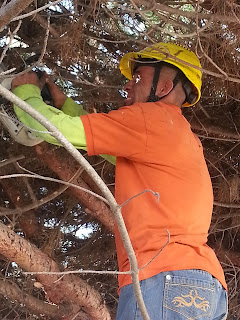 With storms blowing down trees elsewhere in Venice, the VSA has initiated a tree trimming and thinning project to protect the 21 Italian Stone Pines around the Venice Post Office.


“These pines are in dire need of care,” said Darin Morris, a Grand Boulevard resident and landscape architect.  “All the canopies are quite dense and severely top heavy, which puts them at extreme risk of blowing over in El Niño storms.”

Mark Ryavec, the president of the VSA, said, “Jim Murez, Ed Barger and I led about 200 volunteers to plant these trees about 20 years ago.  I remember that we named all the trees and that the one I helped plant is named after my great-aunt Lucy.  I feel a personal sense of stewardship.”


Ryavec, Morris and Erin Sullivan have raised $4,500 of the $5,000 needed to pay for a licensed landscaping firm to perform the trimming.  The VSA is seeking donors to contribute the remaining $500.  All donations are tax deductible.

“Many have asked why the Post Office or the City is not paying for the trimming,” Ryavec said.  “We’ve checked with both and neither have the funds for the trimming now, while there is urgency so we don’t lose any of these trees in the coming storms.”

Sullivan, Morris and Ryavec initially proposed to the Postal Service and the City to widen all the tree wells to better accommodate the tree roots, to install decomposed granite in wider tree wells to allow more precipitation to reach the roots, and to replace sidewalk sections where they have cracked.  The Postal Service pled budget shortfalls and the City’s Division of Urban Forestry pointed out that before the tree wells are widened and the sidewalks repaired, the trees should be pruned first – and the Division was unsure of when it could fund this.


The Venice Neighborhood Council’s Neighborhood Committee reviewed and approved the VSA application for the $5,000 but the VNC Board ignored their own committee's recommendation, electing instead to fund projects that appeared to be personal favorites.  Morris said, “It was sad, as they missed the long-term value of the trees as a community asset.  If they receive proper care these trees have the potential to outlive all of us.”


Posted by venice stakeholders at 11:42 AM