Funds are urgently needed to support our attorney's effort to stop the city's plans for a huge homeless shelter on the MTA Lot that will be just another magnet for homeless to come to Venice from all around the nation, yet will not solve the problem.
Think of the St. Joseph walk-in center on Lincoln at Sunset, which is a plague to nearby residents - last year a homeless woman camping there started a fire in a dumpster behind St. Joseph and it jumped to the house next door and forced a family out of their home for weeks.  That is what the city is putting in our residential neighborhood - on steroids - while the Neighborhood Council has identified better, existing facilities elsewhere that are not a threat to families.
Working with residents living around the MTA lot, the VSA has already filed two legal briefs challenging the illegal environmental exemptions the City and Coastal Commission granted to the "Bridge Housing" project.
With 154 homeless campers taking beds in temporary structures and at least 50 counseling staff, security and food service staff and custodial workers, the facility will have only 20 parking spaces.  Despite an outdoor kennel for residents' dogs and an open-air dining area, all within 50 feet of residents' homes, there are no measures to control noise.  And with the LAPD constantly short of officers, there will be no added security of any kind for the neighborhood and the beach walk streets.
Since the city and Commission ignored our demands that the project receive a full environmental impact report addressing noise, parking, traffic, water quality (human waste from yet more encampments), and public safety, we are now raising funds to file lawsuits against the city and Commission and a writ for a preliminary injunction to stop the project from being installed until we have our day in court.
Litigation is expensive. Fortunately many residents have already been very generous. We have now raised over half the funds needed to cover the lawsuit.
If the shelter goes ahead, it could easily lower property values by hundreds of thousands of dollars, as new encampments mushroom on Main, Hampton, Pacific, Sunset, Paloma, Thornton and other nearby streets.  It also will add a tremendous amount of noise and parking demand and traffic and bring even more drug addicted, mentally ill and criminal transients to the neighborhood.
Please contribute $500 or more today. Tax deductible contributions may be made at Venicestakeholdersassociation.org.
We face a deadline to file the suit, so your contribution is needed by January 1st.  Please email Travis Binen at <travis.binen@delphix.com> for more information or venicestakeholders@ca.rr.com.
Posted by venice stakeholders at 10:15 AM

After a long absence, the Venice Gondola is now back in Venice.

Some time ago the Venice Historical Society had to pull the gondola off the Windward Circle due to the extensive damage it was suffering from vandalism.

It had been sitting in storage near LAX until the beautification of the Venice Post Office environment by the VSA and Neighbors of Grand suggested a new home for the gondola.

As part of beautification project, the VSA raised the funds to remove the over-grown foliage from the small garden at the west end of the Post Office parking lot and then welded steel plates atop the old I-beams that once held up a huge Safeway sign at that location.  The steel plates provide a secure pedestal for the gondola.

Then the VSA and Historical Society retained a fencing firm to install a wider gate from the parking lot to the garden to accommodate the gondola (seen below on the right).


Critical to the project was the support of Post Mistress Brittani Cephas and the financial assistance of Hama Sushi owner Esther Chiang and resident Grant van Every.

Today carpenter (and former VNC Board Member) Stewart Oscars finished the repairs and painting of the bottom and it was moved into an upright position.  Next, Oscars will replicate and install several deck fixtures that were lost over the years and re-paint the remainder of the hull.  Current plans are to re-paint the gondola in traditional black with gold trim.  Other plans include landscaping and possibly Italianate fencing.

Many thanks to all those who have supported this project.
Posted by venice stakeholders at 4:50 PM

The Director of the California Coastal Commission has based his recommendation to grant the Bridge Housing project on the MTA bus lot a waiver from applying for a Coastal Development Permit and an environmental review on a completely bogus parking number.

In his report to the Commission, Jack Ainsworth writes:

However, the site layout provided by Councilman Bonin's Office shows only nine (9) parking spaces, in the upper left corner of the plan. 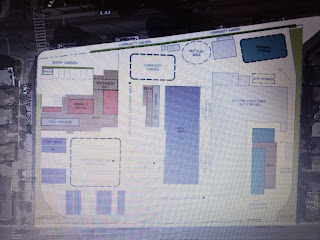 Both the city's Bureau of Engineering report on the project and Ainsworth's report fails to account for parking for security personnel, kennel staff, custodial staff, kitchen staff to prepare and serve 154 meals a day, and various teachers and instructors for the many programs the city intends to conduct at the facility.  Of course, since the city cannot limit applicants to just those who do not own vehicles, it is likely that some residents of the Bridge Housing project will arrive with cars, trucks, SUVs, vans, campers and RVs, which will have to be parked in street parking spaces, taking these from beach visitors and residents alike.

The Commission should proceed with a full environmental review of the project under a Coastal Development Permit application, focusing on the adequacy of parking, the impact of noise from the outdoor dining area, outside dog kennel and the numerous exterior HVAC systems on residents living less than 50 fifty away.  A separate study of the historical contamination on the site is also required along with its potential to harm residents, staff and visitors to the site through accumulation of vapors in enclosed living quarters and offices.

Residents may attend the Commission's hearing on Wednesday, December 12 in Newport Beach to protest the lack of a full environmental review.  One must arrive before 9:00 am and submit a speakers request form to address the Commission.

Posted by venice stakeholders at 5:33 PM

Post Your Opinions on the Future Development on the MTA Lot

Whatever occurs with the temporary - and misguided - Bridge Housing proposal for the former MTA bus lot on Main Street at Sunset, the MTA will eventually collaborate on a joint development of the site with a for-profit developer; i.e., on a bricks-and-mortar housing complex.

I encourage you to let your views be known to the MTA.  This project will have a tremendous impact on the surrounding area, and will either fit in and complement the current housing patterns or be, as Prince Charles said of an overly large and modern development in London, a "carbuncle" on the face of Venice.


The MTA is soliciting residents' views at:  metro.net/division6

I recently learned Councilman Bonin and homeless advocates are soliciting people outside of Venice to participate in the survey and ask that the future project be 100% permanent, supportive housing; i.e., populated entirely with people recently homeless.  This is counter to the MTA guidelines which call for not more than one-third affordable units in these projects and which is counter to "best planning practices," which encourage a mix of market rate, work force and affordable units, only some of which would usually be permanent, supportive housing.

Here are some of the other points that I made:

1.  Comply with the height and density limits of the Venice Specific Plan, at least on the perimeter where the project faces existing two and three story residences.
2. Consider replicating the historic Venice Craftsman architecture, such as the two story apartment buildings on Horizon.
3.  Do not close off the project from the surrounding area, but instead continue a walk street from Pacific to Main Street.
4.  Comply with the parking requirements under the Venice Specific Plan and add additional parking for visitors and for residents, preferably in a subterranean, automated parking structure.
5.  Include some artists lofts as part of the affordable units to re-establish Venice's art colony, and limit affordable units to one-third of the project.

Of course, these are my preferences; let the MTA know yours.
The survey closes this week, so do it as soon as possible.
Posted by venice stakeholders at 8:53 PM