As a 22-year resident and property owner in Venice, I feel I have some perspective on the homeless situation and how it’s changed for the worse over the past few years.

I was at the VNC meeting on Monday. It’s focus was to convince everyone that there’s a problem with homelessness, but there were really no answers about how the supportive housing projects would specifically relieve the dire situation we’re facing as a community here in Venice.

I was told by multiple VNC reps that only about 45 units of the Venice median project would be allotted for the chronically homeless – and there is no guarantee that ANY of the homeless now living in Venice would receive that housing. In fact, statistically, none of the people currently living on the streets of our community would get this housing. Even if 45 out of the over 3,000 thousand homeless people living on the streets in West LA alone were to get that housing, how, in any way, would it help our community? These projects would provide services to not only its residents, but to other homeless people as well. They will act as magnets, drawing even more homeless to the streets of Venice, further exacerbating the problem.

I asked multiple representatives supporting the project this question and no one had an answer. I also asked how will these projects positively affect our community. The only answer I got was that “…it will get 45 people off the streets.” When I replied that this a statistically insignificant number and that the 45 folks may not even come from Venice, I was told “…it’s better than nothing.” When I said these projects would attract even more homeless to the area, their reply was that “…they will come any way.”

I asked why there are 3 projects in Venice, but none in the Palisades, Malibu or any of the other beach communities I was told, “…because they (Malibu/Palisades) will fight the projects more than Venice.” I was surprised by his honesty, but is this how major policy decisions should be made?

Another resident of Venice was concerned about his property values. He was told “…statistically, supportive housing projects have no effect on property values.” I cannot imagine this is correct, or the stat was cherry picked – maybe because on skid row the property values are already low, they're not effected by creating supportive housing? Personally, I took a huge financial risk buying property in Venice. Most of my wealth is tied up in that property. Why should the property I’ve worked so hard for become the victim of a dubious social program?

I asked, “If we’re really talking about providing housing for the greatest number of people, doesn’t it make sense to create supportive housing in areas that have lower building costs, because then you’d be able to build many more units, thus getting more people off the streets? I was told that “…if I had time I could tell you how this works, but I’m never going to convince you anyway.” When I expressed my frustration at his answer, he took a morally superior tone, and I was made to feel like I was a bad person who doesn’t care about homeless people. I do care about homeless people, but the project they’re proposing will not address the current problems and will only make them worse.

All this being said, I might support supportive housing in Venice, if there was some guarantee that something would be done about the truly disgusting and dangerous encampments at 3rd and Rose and the Boardwalk and Rose. This is what I observed in just one week of dropping my 8 year old daughter off at surf lessons in the parking lot at Rose Ave. at 8:45 in the morning (no exaggerations):

A man defecating against a building on Speedway, even though there were open public restrooms less than 100 yrds away.

Two men having a fist fight over a skateboard.

A totally naked man showering in plain view of dozens of small children next to the playground.

Open drinking and drug use – again, in plain sight of kids.

I nearly ran over a man rolling around in the middle of Speedway, totally out of his mind on drugs/alcohol.

When my wife picked up my daughter one afternoon, she found the whole group of kids crying because a homeless man had lit another homeless guy's stuff on fire. The fire was so large a fire truck had to come.

How is this acceptable? Why is this behavior condoned? How are these squalid encampments not a health code violation? Why are the laws not being enforced in Venice? The encampments on the beach in the Palisades was removed. I don’t see any encampments in Malibu, or Manhattan Beach or Hermosa? How about Beverly Hills?

I pay tens of thousands of dollars in property taxes every year, yet I feel like I have no input in major decisions that affect my quality of life—from the supportive housing projects, to the “road diets,” to my home being designated an “historic property” without any public notification or discourse or vote.

As a true stakeholder in my community, I feel it’s unacceptable that these types of projects that directly affect my life keep getting approved and implemented with next to no public input. The only chance we have to make an impact is to attend the public hearings that are coming up:

Comments can be sent to: cally.hardy@lacity.org

I’m going and I encourage all residents of Venice to attend. If we don’t speak up, it’s a done deal.

This letter was sent to the Board of the Mar Vista Community Council:

Dear Neighbors,
I am writing on behalf of Venice Stakeholders Association (VSA) to urge you to vote to restore the two traffic lanes which were lost on Venice Blvd. due to Mike Bonin's misguided and dangerous reconfiguration of that boulevard in central Mar Vista.
The VSA is a non-profit organization dedicated to civic improvement.  The VSA supports slow growth, protection of the limits of the Venice Specific Plan, neighborhood safety, better traffic circulation, increased parking for residents, neighborhood beautification projects, historic preservation, habitat restoration and protection of coastal waters.
The ill-conceived re-configuration of Venice Boulevard and the loss of two traffic lanes has had an immediate and detrimental impact on the life of Venice residents.  As you know, traffic is at a standstill during early morning and early evening drive times.  There has been a corresponding increase in cut-through traffic on other streets such as Palms, which are narrower and thus less capable of absorbing this east/west traffic.
Your residents have counted more accidents with this bizarre street/parking/bike lane layout than before it was installed.
As a long-distance cyclist I can attest to its highly unsafe design.  With the bike lane hidden behind a lane of cars, those on bikes cannot see if drivers are intending to turn right and drivers cannot see whether a bike is approaching as they start a right turn across the bike lane.
I frequently ride south to Redondo Beach and north to Cross Creek.  I know of no areas along those stretches (about 30 miles) which have a hidden bike lane such as one Bonin installed in your community.
And as you know, there was a perfectly acceptable bike lane on the boulevard before this change was made.
As the first-runner up in the recent Council District 11 race, I want you to know that I would not have supported the loss of two traffic lanes at this location.  Our east-west traffic infrastructure simply cannot afford any lane losses, however noble the cause.
If driver speed is an issue, we would suggest that it be addressed in the old fashioned way, with the frequent placement of motorcycle police officers along the boulevard to cite speeders.
Thank you for your consideration of our views.
Sincerely,
Mark Ryavec, President
Posted by venice stakeholders at 4:44 PM

Please Support Our Neighbors in Mar Vista to Restore All Traffic Lanes on Venice Blvd.

Posted by venice stakeholders at 8:33 AM

Our Mar Vista neighbors have generously provided Venetians with new, larger signs to protest the gridlock on Venice Blvd. resulting from Bonin's autocratic removal of two traffic lanes.  Contact me at venicestakeholders@ca.rr.com if you'd like one. 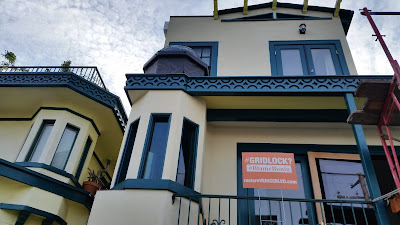 Posted by venice stakeholders at 6:19 PM