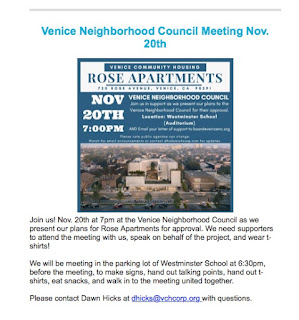 Please send the following message to the Los Angeles Planning Commission opposing Venice Community Housing Corp's proposal to build the first four-story building in the Oakwood neighborhood.  As is readily evident from the previous meeting notice, the project will dwarf everything else in Oakwood and set a dangerous predecent for future development.

The VCHC is soliciting non-Venice residents to deluge the Commission with emails.  We need to fight back to protect Venice from over-development.

Please oppose the VCHC's 718-20 Rose Avenue project.  It is too tall, too dense, has too little parking, and is way out of character with Venice.  It is extremely out of step with both the Venice Specific Plan and the desires of residents for Venice to remain a low-rise community.  Approving its 45-foot height and almost no parking will set a dangerous precedent. Send it back to the drawing board!

Please send your message of opposition today; the hearing is this Thursday!
Posted by venice stakeholders at 12:35 PM

“The City and the Coastal Commission jammed this project through the system and bypassed the environmental laws and the Coastal Act,” said Mark Ryavec, president of the VSA, a non-profit corporation dedicated to protecting Venice residents and their neighborhoods.  “No government or project is immune from these laws.”

The City’s so-called “Bridge Housing” facility would be located in the middle of a residential neighborhood just one block from Venice Beach.  It includes a large semi-permanent “tent” building containing a 100-bed dormitory, an outdoor dining area, a large outdoor kennel for residents’ pets, and several other buildings.  Despite having 154 beds and dozens of staff, the project would have as little as 20 parking spaces.

According to the lawsuit, the City approved the project “at lightning speed,” in just 11 days, while the Coastal Commission approved it in just nine days.  The Venice Neighborhood Council, which is elected by Venice residents, was not even consulted.  “The neighbors and the public were ambushed,” said Ryavec.

Ryavec acknowledged the need for shelters and other facilities to address Venice’s persistent homeless problem.  However, he added, “a residential neighborhood like this one is not the right place for such a project, especially since much of the facility is essentially outdoors, and just across a narrow street from homes.”

The VSA lawsuit says that the City refused to do any environmental review for the project under CEQA, and the Coastal Commission granted the City a waiver from the usual requirement of a Coastal Development Permit, thereby avoiding any analysis of the impacts of the project on coastal resources such as parking and water quality.

“Just because the City and the Coastal Commission think this project will benefit the public doesn’t mean they can avoid considering its impacts under the environmental laws and the Coastal Act,” said Ryavec.  He noted that other beneficial projects, such as hospitals and schools, must comply with these same laws.

“If a developer proposed a 154-bed convalescent hospital with dozens of staff people, an outdoor kennel and dining facility, just feet from residents’ living rooms, with only 20 parking spaces, the City would require an environmental impact report and mitigation before approving it,” he said.  “A homeless shelter is no different.”

The VSA is still collecting funds to support this lawsuit.  Donations may be made on this site to the right by credit card.
Posted by venice stakeholders at 3:35 PM

We have now raised $100,000 toward our legal effort to stop the 154-bed homeless shelter on the former MTA lot on Main Street.

I am writing to ask for one more donation.

All are concerned that this project will be yet another magnet for even more homeless to come from around the nation to "try" to secure free housing.  That word - try - is the danger.  The site will only hold 154 people, while the city acknowledges that there are about 1,000 people living on the streets of Venice.  Where will the hundreds more that come to sign up for a bed go after all the beds are full?  Onto the sidewalk, into the alleys, on the Boardwalk, on private property.

None of our supporters oppose Bridge Housing or other efforts to house the homeless.

They object to this project being rammed down their throats and to it being located in residential neighborhood, to the lack of any protections for residents - for example, no 24-hour security outside the facility and no sound wall to dampen the noise from a kennel and exterior HVAC equipment - and the complete failure of the city to conduct an environmental impact report for the project.

If you want to see our legal "causes of action" just send us an email at venicestakeholders@ca.rr.com and we will send you our attorney's brief, which the city ignored.

Our deadline is January 14th, ten days from tomorrow.

All donations are tax deductible.

Posted by venice stakeholders at 4:49 PM