At the recent Zoom meeting of the Westside Regional Alliance of Community Councils (WRAC), Councilman Bonin maintained that the $150,000,000 cut in the LAPD's 2020-21 budget represented no more than .7% of that budget, i.e., less than one percent.

I have been having trouble understanding how such a minor cut could result in such drastic personnel loses, for example, reducing the Venice Beach Detail from 42 to 26 officers, with losses of entire units in many specialty fields.

I discussed this calculation with a senior LAPD Pacific Division officer and he told me the cut was closer to 8%.


So, despite being Harvard-educated, Mr. Bonin does not know how to calculate percentages.  And as we have known for years, he does not care about the increasing crime and shootings and murders that have resulted from his negligence.

Addendum:  I shared this with Chief Michel Moore and he replied:

Posted by venice stakeholders at 2:12 PM

Gates have been installed at the Gondola Garden on the Windward Traffic Circle to make the Venice gondola more accessible to the public.

"As we move back to normalcy in 2021, we want to give visitors an opportunity to take photos with the gondola without any obstacles in the way," said Mark Ryavec, president of the VSA. 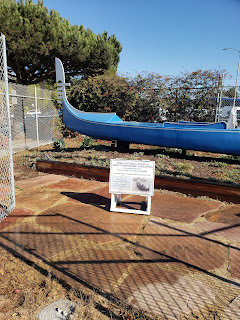 "Working with the Historical Society, we also are considering training docents who would give talks to the public about Venice's development by Abbot Kinney and the "Lost Canals" district, which was centered on the traffic circle," Ryavec said.  The circle was originally a boat basin (see below) where gondola tours were launched daily, and Windward Avenue (Lion Canal) and Grand Boulevard (Grand Canal) were two spokes of the canal system.

The gondola exhibited here is a replica of the gondolas that once cruised our canals.

The VSA is also looking for residents who would volunteer to regularly weed the garden, wash off the gondola and trim the bougainvillea. 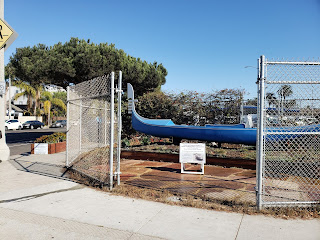 The creation of the garden, the repair and refurbishment of the gondola, and installation of the flagstone plaza and the new gates were funded by residents and local businesses, including Hama Sushi, the Erwin Hotel and Russ Cletta Design Studio.  Donations to continue maintenance are tax deductible and may be made to the right by PayPal or Zelle. 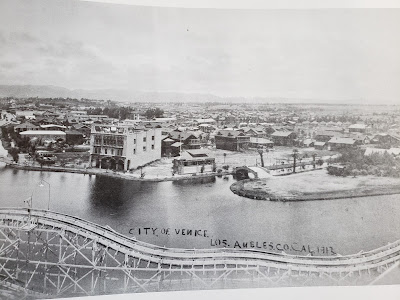 This photo shows the boat basin with the roller coaster in the foreground, and Lion and Grand Canals coming in from the right.  The small building in the middle of the photo facing the water is the current site of Hama Sushi.  Today the gondola sits across Lion Canal (now Windward) from Hama Sushi at the foot of the bridge seen in the photo.  The management of the Venice Post Office has generously allowed the Venice Historical Society to exhibit the gondola on its property.

Posted by venice stakeholders at 2:22 PM