Later this month it is expected that the proposal to place temporary housing for 100 street dwellers on the former MTA bus lot on Main Street will come before the Venice Neighborhood Council.  Now is the time to voice your opposition to this misguided concept, which will only exacerbate Venice's homeless burden.

Please send the following message to <Board@VeniceNC.org> and a copy to Councilman Bonin's deputy:  <taylor.bazley@lacity.org>

Members of the VNC Board:

I oppose the use of the former MTA lot for homeless housing.  The lot is surrounded by residences and is too close to four schools on and around Westminster Elementary School.  This use will inevitably draw more transients to this neighborhood and to the schools.

There are no assurances that the new facility will actually reduce the homeless population in Venice, nor any guarantee that new encampments will not just spring up all around the MTA lot.

The City's DWP facility in West Los Angeles (shown below), north of Olympic Blvd. and east of Centinela Avenue, is under-utilized and the south end of the parking lot (upper center of the photo bordered in light green) is a far better location for a temporary shelter.  It is surrounded by industrial uses on three sides and on the north the rest of the parking lot could provide a 200 hundred foot buffer between the temporary housing and the residences on Nebraska. 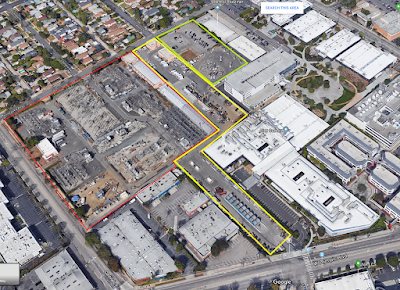 The concept of Bridge Home housing is untested and residents should not be forced to be guinea pigs.  Please urge the City to find a location, like the DWP parking lot above, that is set back from residences.

Thank you for considering my views on this important issue.

Posted by venice stakeholders at 1:29 PM

100 beds on Main Street won’t solve homelessness, but it will move associated problems closer to residences and schools

By John Tapia
Tapia is a pharmacy owner and longtime Venice resident writing in response to “Help is on the Horizon,” a July 12 opinion piece arguing in favor of establishing temporary housing for the homeless in Venice.
The city’s plan to convert the former Metro bus yard on Main Street into a 100-bed temporary housing facility will be a catastrophe for Venice. While I appreciate that Los Angeles Mayor Eric Garcetti and L.A. City Councilman Mike Bonin may have the best of intentions, the city’s previous failures to keep our community safe from the ill effects of homelessness would suggest that city leaders are not prepared to address the dangers inherent to a temporary housing facility at this site.
First off, the site is a couple blocks from four schools clustered on or near the Westminster Avenue Elementary School campus. These house our community’s most vulnerable children, and some have already been harmed by repeated incidences of homeless campers and those occupying vehicles on Main Street and Westminster openly exposing their genitals and relieving themselves in sight of children. Inviting 100 homeless individuals to live at the Metro lot — and others who can be expected to just hang out outside (to sell drugs, see their buddies inside, etc.) — just increases the risk of such incidences or worse.
Next, the site itself is surrounded on all sides by residences, unlike other potential sites on the Westside, which are at some distance from residences. I anticipate that the 24-hour nature of the facility will allow a lot of coming and going, much of it at night. This will undoubtedly relocate some of the late-night noise problems associated with current encampments along the boardwalk and on Third Avenue between Sunset and Rose avenues. It also has the potential to bring the crime associated with those sites to our neighborhood.
The city has presented nothing to suggest that it will prevent the public space around the Metro yard, or the parkway and sidewalk across the street at the Dogtown Station Lofts, from becoming yet another large homeless encampment.  While Garcetti recently suggested that the city has the right to return to enforcing its “no sleeping on a sidewalk” ordinance, we have yet to see any proof of this — nor has the council office publicly agreed to direct the LAPD to use that ordinance to prevent additional encampments around the temporary housing facility.
Attorney Michael Rapkin’s recent guest opinion piece in support of establishing temporary housing in Venice suggests that the city will start cleaning up former encampments once the facility is up and running. But city sanitation workers already clean up encampments along the boardwalk and Third once a week, with little lasting effect. These areas quickly return to Third World conditions, with litter and food waste and bodily fluids strewn among assorted furniture and enough bicycles to suggest that some of them were stolen. It’s not clear what benefits additional cleanups will bring.
What would benefit homeowners and renters living near existing encampments is for the city to declare them “red zones” — that after campers are offered transitional housing or other accommodations, the city would declare that no sleeping, camping or storing personal possessions would be permitted at the former encampment site. The city has adopted a similar standard to bar people living in their vehicles from parking near schools and parks and/or on residential streets at night, and they could do so for sidewalks and parkways near residences in Venice, too.  We have seen no indication, however, that the city intends to enact similar restrictions for existing encampments.
Mr. Rapkin also asserts there would be far less personal property strewn around Venice once the bridge-to-housing facility is opened, since personal property could be stored on the former Metro lot. Assuming some of the folks now camping near the beach or along Lake Street next to Rite-Aid move into temporary housing, there is absolutely nothing in the city’s plan that will prevent other transients, from elsewhere in Los Angles or from out-or-state, from taking their place.
The end result of temporary housing will likely be no decrease in the size or odiousness of current Venice encampments, no checks against the growth of new encampments popping up on and around Main Street, and a riskier situation around Westminster Elementary.
No thanks!
Posted by venice stakeholders at 8:38 AM

Absolutely incredible! What an amazing accomplishment! The entire group should be commended for coming together and working toward a common goal in a way that everyone was able to help in whatever capacity they could share!

Neighbors in the Windward Traffic Circle district have just about completed an ambitious beautification project around the Venice Post Office.


The project, which cost about $40,000, involved new signage on the fences surrounding the Post Office, power washing of all the sidewalks for a month, construction of 55 planter boxes with lining, importation of over 50 tons of dirt and potting soil, and the installation of hundreds of cacti.  An add-on project involved the removal of concrete tree well covers that were strangling the Italian Stone Pines that ring the Post Office and their replacement with decomposed granite.  The neighbors also funded the replacement of one dead pine tree, an expensive proposition.  This was directed by landscape contractor Peter Eberhard, shown below.  (Yes, the tree makes one think of Christmas, but the expert advises not to trim the tree until cooler weather arrives in the fall.)

All the funding came from residents and businesses within two blocks of the Post Office.

The spark plug for this effort was artist and musician John Vester, who lives on Grand Blvd.  Joining him in leading the effort were Paul and Stacey Foxson, also residents on Grand.

Captain James Roberts and SLO Kristan Delatori and the entire LAPD Pacific Division team were extremely supportive, as was Post Mistress Brittani Cephas who granted Neighbors of Grand and the VSA permission to install the planters on PO property and granted access to two water spigots on-site.

The heavy lifting was done by contractor and Grand Blvd. resident Mike Castillo who lent his crew - at cost - to construct the 55 4'x8' planter boxes and import the tons of dirt and potting soil to fill the boxes.  (Local business owner Ralph Ziman graciously granted us access to a large pile of dirt on his nearby construction site.)

Rialto resident and landscape architect Russ Cletta volunteered his crew - also at cost - to line the boxes with filter fabric to retain the dirt and to provide a barrier between the dirt and the wood sides and bottoms of the boxes.  They also mixed all the Venice dirt with the tons of potting soil.  Residents volunteered countless hours to shovel dirt and plant the hundreds of plants that were donated by residents and by Russ Cletta.

Several residents made extremely generous contributions to the VSA to support the effort, including Grant van Every, Jack Kindberg and Hama Sushi owner Esther Chiang (who also hosted a lovely party to celebrate completion of the installation).

For me, this effort was a sentimental journey back in time.  About 28 years ago Jim Murez, Ed Barger and I led 200 residents on a Sunday to plant the 21 Italian Stone Pines and the 20 New Zealand Christmas Trees on Windward.  My father and sister Janice joined me in that effort and one of the pines, on the corner of Windward and Riviera, was named after my Aunt Lucy, who had recently passed away.

We have a few more projects planned for the PO triangle, so contributions (tax deductible, of course) are welcome on this website.
Posted by venice stakeholders at 12:02 PM