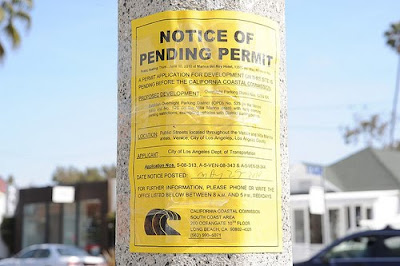 The public has just seen a remarkable and brazen example of deceit by a public body in the actions of members of the California Coastal Commission in their rejection of coastal development permits for overnight restricted parking in Venice.

The Venice Stakeholders Association and the City of Los Angeles participated in several months of good faith settlement negotiations with Coastal Commission staff and the Commission itself, which resulted in a compromise plan to allow Venice residents to finally have control of parking on their blocks overnight, while also assuring adequate beach access for visitors.

In executive session last month the Commission approved the settlement of the VSA lawsuit, which included significant compromises on VSA's part and the part of the City. The City had to significantly increase the early morning parking available for beach visitors, while Venice residents would have to try out an untested new Oversize Vehicle Ordinance before being allowed to implement overnight parking restrictions on their blocks. The attorneys representing all parties signed the agreement and, again, in good faith all the attorneys went into court last week to ask the judge to remand the suit to the Commission to formally adopt the agreed settlement.

However, the commission then at its hearing today reneged on the agreement, and scuttled the permits they had promised Venice residents. They oddly created new demands for the type of application the City must present and set a requirement that the City perform a study that proves that non-resident parking is a problem in Venice. This demand is bizarre as everyone who has visited Venice can see the evidence of the over 200 RVs, campers, vans, and buses that take up hundreds of spaces full time, many of them parking right on residents' doorsteps. Indeed, these vehicles are the primary cause of insufficient parking for beach visitors as they stay parked on city streets near the beach 24/7.

"This 'bait and switch' trick is reprehensible in a public body," said Mark Ryavec, president of the Venice Stakeholders Association. "Throughout this long process the Commission and its staff have acted dishonorably, first saying some years ago that no coastal development permit would be required for overnight parking 2-6 AM since State law had preempted this time period, then later reversing themselves and requiring a permit."

"Now they are setting yet another hurdle," Ryavec said, while expressing doubt that any Commission members or staff have visited Venice to see for themselves the impact these vehicles have on residents."

"Our only recourse is to remove overnight parking in Venice from this arrogant body's jurisdiction by renewing our litigation," Ryavec said.
Posted by Richard at 5:37 AM