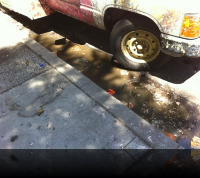 (August 29, 2010 –Venice Beach, CA) – Representatives of three Venice residents’ organizations today demanded that the City of Los Angeles and the California Coastal Commission take immediate steps to stop RVs, campers and other vehicles from camping overnight in neighborhoods and dumping their human waste on public streets, which endangers residents and pollutes the coastal waters at Venice Beach.

The demand by the Venice Stakeholders Association, Marina Peninsula Neighborhood Association, and Venice Canals Association came in the wake of a widely-publicized incident in which an RV owner uncapped her sewage holding tank and drove north on Pacific Avenue, just a block from the ocean, releasing over 100 gallons of human waste onto the street as she drove. The woman was arrested but subsequently released, and the City of Los Angeles took several days to clean up the mess.

Such dumping incidents are common in Venice. Just a few weeks ago, Robert Feist, past president of the Venice Chamber of Commerce, observed a similar act on nearby Electric Avenue. “I saw a man take off the cap of his holding tank and drive down the street spewing sewage right in front of homes,” said Feist.

In addition to intentional dumping, the decrepit condition of many of the RVs and campers means that such vehicles often leak their sewage onto public streets. In addition, people who live in vehicles lacking toilets – such as cars, trucks and vans – simply relieve themselves on local streets, alleys and in residents’ yards.

Residents say it is time for the City to take firm action to stem the tide of human sewage in Venice neighborhoods. “We have struggled for years to get the City to remove these vehicles from the neighborhood and stop the dumping and other negative effects,” said Mark Ryavec, the president of the Venice Stakeholders Association (VSA). “Now, the councilman of the district is talking about investigating why it took so long to clean-up the sewage, but this is not the answer. The answer is for the City to remove the source of the problem, which is the vehicles themselves.”

Marina Peninsula Neighborhood Association Director Diana Spielberger agreed. Speaking at the site of one of the recent dumping incidents, Spielberger said, “We cannot tolerate this kind of health-threatening pollution and irresponsibility from transients who live in RVs and cars. Our city streets are not campgrounds and what these people are doing is clearly against the law. We need our city officials to enforce the law.”

Ryavec outlined several actions that city and state agencies should take to address the constant intentional dumping and leaking of human waste from RVs and other vehicles used for camping on Venice streets:

1. City Councilman Bill Rosendahl (CD-11) should immediately release petitions for residents to complete to request the posting of “No Oversize Vehicle” signs on their neighborhood streets, which would ban vehicles over seven feet tall and allow police to remove such vehicles. The Councilman should also expedite the installation of the signs.

2. The Los Angeles Police Department should start aggressively enforcing the City’s current ban on living in vehicles (LAMC 85.02), as well as laws prohibiting criminal activity by the owners of the vehicles, including dumping and leaking of sewage, late night noise, drug sales, prostitution, public inebriation and harassment of residents. To support this effort, the LAPD should increase the number of undercover officers in Venice, and the City Attorney should back up the Department by aggressively prosecuting such violations.

3. The California Coastal Commission, in light of its obligation to protect coastal waters from pollution, should reconsider its recent denial of a permit that would allow the City to implement overnight restricted parking in Venice, a measure that would stop camping in any vehicle, regardless of size.

In addition, Venice resident Heidi Roberts called for the LAPD to reverse its plans to redeploy 21 officers away from Venice Beach at the end of the summer season. “The recent dumping incidents and a 240% increase in transient-related crime in Venice, reported by the LAPD’s Pacific Division, makes it imperative that we keep these officers here throughout the year,” Roberts said. Indeed, she noted that the City’s plan to post signs banning oversize vehicles would be ineffective without more officers to enforce the rule.

Images of 100 gallon sewage dump at Pacific and Fleet:
http://gallery.me.com/locoroyale/100498

Images of RVs, puddles of sewage and human feces at 3rd Avenue at Rose
and Sunset : http://gallery.me.com/locoroyale/100521
Posted by Richard at 2:49 PM