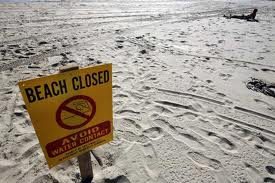 The City Attorney's Office has just provided us with this formal report on the result of the prosecution of the couple that was involved in the sewage dumping incident at Pacific and Fleet on the Venice Peninsula:

Both defendants were arrested on their warrants on Tuesday October 12, 2010. They appeared in court on Wednesday October 13, 2010 for arraignment. The defendants were charged with three counts each (Penal Code 370/372, LAMC 62.80(a), and Penal Code 182(a)(1)). Both defendants pled "Open to the Court" to the following sentence: 36 months of summary probation, Time Served in County Jail, 120 days of county jail suspended (which means that if the defendants violate the terms of their probation the Court will automatically impose 120 days of county jail each), restitution and a stay away (Imperial to the South, Navy to the North, Sepulveda to the East and the Pacific Ocean to the West). We will be having a restitution hearing on November 16, 2010 (to recover the costs of the clean up).
Pleading "open to the Court" means that the Court determines the sentence (after hearing from both our Office and the defense). When pleading "open to the Court" the defendants must plead Guilty or No Contest to ALL charges (in this case there were three charges filed against each defendant).

(This is from Claudia Martin, the Neighborhood Prosecutor assigned to Venice.)
Posted by Richard at 1:16 PM