The Venice Stakeholders Association today sent a letter to Mayor Antonio Villaraigosa calling for an investigation into claims on the website Yo!Venice! that the Mayor’s Associate Director of Transportation, Jim Bickhart, has repeatedly posted hostile and hateful comments on the website under a pseudonym in an effort to discredit Venice Stakeholders and those who support overnight restricted parking in Venice.

“By attributing these highly negative sentiments concerning those who live in vehicles to “the Stakeholders” these posts are a calculated attempt to paint us – and all of our supporters - as hateful and callous,” said Mark Ryavec, president of the VSA. Ryavec noted that he earlier co-chaired a community committee that recommended a “Vehicle to Housing” transition program to relocate vehicle dwellers to remote parking lots and to provide them services.

“Our group has never engaged in the type of hostile name calling that it appears Mr. Bickhart has attributed to us,” Ryavec said.

“This is an ugly escalation in the community debate on this issue,” Ryavec said, “and is inappropriate for any public official.”

The editor of Yo!Venice! has called on-line for Bickhart to claim or deny he indeed is the author of the posts. There has been no reply from Bickhart.

“If these posts were indeed made by Mr. Bickhart, we question his suitability for a position of public trust. If he wrote it and believes what he wrote, in our opinion he does not belong in public service. If, on the other hand, he wrote it but does not believe what he wrote, and propagated these remarks to discredit our group (and Yo!Venice! and others who support overnight restricted parking), then his behavior amounts to a political dirty trick, which is intolerable in a public official.” 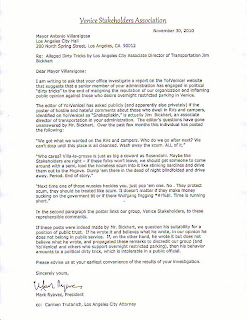