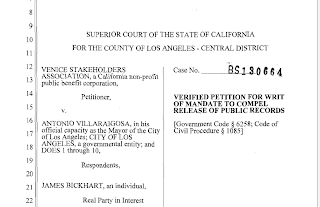 (Venice, CA/2-17-2011) The Venice Stakeholders Association today filed a lawsuit under the California Public Records Act to obtain records which may prove that a high-level staffer in the Mayor’s office anonymously posted hostile comments on a widely-read neighborhood website in an effort to discredit the VSA and others who support overnight restricted parking in Venice.

“The Mayor’s Office is withholding documents in violation of the Public Records Act that we believe confirm that Jim Bickhart, the Mayor’s Associate Director of Transportation, is the agent provocateur who smeared our organization on YoVenice.com,” VSA president Mark Ryavec said. “We also believe the withheld documents will provide additional evidence that Bickhart misused City time, a City office, and a City email account to further his personal campaign against overnight restricted parking and anyone who disagreed with him.”

The suit alleges that the Mayor’s Office, in refusing to disclose certain documents, has asserted specious “privileges” such as personal privacy. In fact, says John Henning, counsel for the VSA, none of the requested records is exempt from disclosure. “Under the Public Records Act, the public has a right to see any evidence that senior members of the Mayor’s Office staff are using City position and resources to oppose the official position of the City, and to find out what the Mayor’s Office is doing about it,” Henning said.

The records request has already forced the Mayor’s office to turn over numerous documents evidencing Bickhart’s vendetta against the overnight parking districts, known as OPDs. They include numerous email messages apparently transmitted from Mr. Bickhart’s City of Los Angeles email account and using his official City email address, in which he variously requested detailed information from City departments on OPDs; scheduled meetings with City employees on City time to generate opposition to the OPDs; drafted a letter to City officials opposing the OPDs; and discussed the status of settlement negotiations between City representatives and Coastal Commission staff concerning the pending litigation between the parties. The emails also indicated that Mr. Bickhart used City time for in-person meetings and perhaps telephone calls to advance his personal objective of defeating the OPDs.

None of these activities fall within Bickhart’s job description in the Mayor’s Office, which includes transportation issues at LAX and the Los Angeles Zoo.

Ryavec said Bickhart’s activities were an abuse of his position. “Councilman Rosendahl’s staff, the City Attorney’s Office, the Bureau of Engineering and the Department of Transportation have all spent years trying to win Coastal Commission approval for the OPDs,” he said. “Meanwhile, Jim Bickhart was using City time, resources and, most importantly, his position to undermine and defeat the City’s efforts.”

“The whole situation is rather bizarre and suggests the Mayor is not properly supervising his staff,” Ryavec said. “Bickhart should be reprimanded immediately, and the Mayor’s Office should turn over all of the documents we’ve asked for.”
Posted by Richard at 3:06 PM