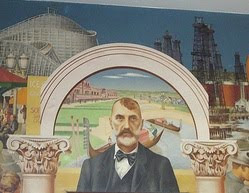 I am writing on behalf of our organization to oppose the sale of the historic Venice Post Office.

We are concerned that the protection afforded by the State Historic Preservation designation, which we understand has not yet been awarded to this structure, will not ultimately prevent demolition, should a new owner wish to make another use of the site. This protection simply allows a government entity or a private party to purchase the structure to avoid demolition, which leaves the future of the structure in perpetual doubt.

Further, as pointed out by Mr. Richard Maher of the Postal Service’s Public Affairs and Communication Office in his appearance before the Venice Neighborhood Council, the Postal Service cannot assure that the historic foyer of the building would remain open to the public once the property is sold to a private party. If re-proposed as a bank, for example, it is likely that the foyer would continue to be open to the public. However, as a law office or film production office or in many other potential uses, it is not likely to be accessible to the broad public.

We believe the only course of action for the Postal Service is to maintain possession of the Post Office and move the sorting operations for Venice (or for the section of Venice near and around the Post Office) into the Post Office building, with the rest being moved inland to less expensive property.

Further, please find attached plans for the Annex site to be converted to a community and arts center and a public park. We would propose that the City and County of Los Angeles sponsor a park bond act for this and other meritorious parks projects throughout the County, as was done with Proposition A some years ago. The proceeds would be used to fund the purchase and retrofitting of the building and site to this new community use. Proposition A provided $10 million dollars for the refurbishment of the Venice Boardwalk and many other parks project in Los Angeles County and this mechanism is certainly available in this instance as well.