So, Who’s Telling the Truth…? 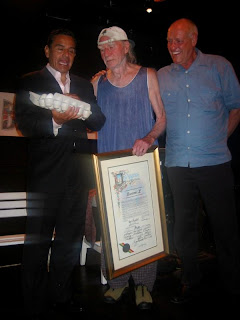 Here’s one more odd chapter in the chronicle of “Stakeholders vs. City Hall” in the effort for residents to feel safe in their homes and on the sidewalks of Venice.

I was invited to Paramount Pictures last week to hear the Mayor give his annual “State of the City” address.  We all sat in the studio’s large theater and heard about the successes and remaining challenges of the City’s many transportation projects.  While he touched on some other topics, “LA Fast Forward” and fulfilling Tom Bradley’s vision of a “subway to the sea” were the centerpieces.

Then, bogged down in traffic on Melrose, I noticed that Mozza Osteria, a restaurant I had been meaning to try, was just ahead.  Since the Mayor’s traffic improvements were not in evidence in the stalled traffic, I dropped the car off to a valet and found a seat at the bar for dinner.

Some commotion behind me made me turn my head and there I saw the Mayor sitting with what appeared to be his girlfriend and other family members.  He was frequently out of his seat, greeting other diners or talking on the phone.

I thought to myself, would it be appropriate to ask the Mayor for a moment to talk about the public safety issues we’re seeing here in Venice.  I kept thinking about this while I enjoyed a terrific meal.  As I was finishing up, I thought, why not ask; he’ll just say “yes” or “no.”  So, I scribbled out a note on the back of a business card and gave it to one of those sitting with the Mayor, since his eminence was off again in an alcove on his cell.

A member of his party came over and said the Mayor would speak with me right then.

He was welcoming.  When I told him that I wanted to talk with him about the problems we are having with transient encampments in Venice, he interrupted me and said the real problem was that the council district “has no leadership.”  Then he made another derogatory remark about Bill Rosendahl.

He volunteered that Bill had called him a day or two earlier and asked him to initiate criminal prosecution against me for having posted addresses on the VSA website [of the Mayor, Bill, a deputy mayor, the editorial editor of the LA Times, the lawyer who frequently represents transients, and some other local homeless advocates who by my estimation would welcome the homeless to sleep on their parkways, given that they oppose enforcement of City laws against camping on public property].

I was taken aback for a moment.  This certainly conflicted with Bill’s usually avuncular demeanor and his comment to me two nights earlier that he would give me $20 to pay some homeless person’s bus fare to come camp on his sidewalk.  Bill had told me to leave him on the list.  (It was also odd procedurally because the City Attorney and District Attorney have prosecutorial authority, not the Mayor.)  The Mayor then said, “You are Mark Riabec, right”?  And I replied, “Mark Ryavec, and we’ve met numerous times.”  He said, “Yes, that’s what Bill called about and something about some woman.”

Then we went on to talk about the encampment problems in Venice, the recent attack on two residents on 3rd Avenue, etc.  I told him that Bill had told me that enforcement was out of his hands and that Chief Beck reported to the Mayor, not Bill.  I also told him that Bill had said that either the Mayor or Larry Frank, a deputy mayor, had stood in the way of enforcement of City laws, on the Boardwalk and more recently with the encampment on 3rd Avenue.  The Mayor said, “Not at all.  We’ve stayed out of it in deference to the councilman of the district.”

Then he said, “But if you want me involved, I will get involved.  You may not like my solution, but you will get a solution.  Did you hear me today [referring to his successes with transportation improvements]?  I get things done.”

“When you stop believing that I am in anyway interfering with enforcement in Venice, then come see me and I’ll get involved,” he said.  I told him that we very much would like him to get involved and provide the leadership that both of us feel is lacking.  He told me to call his office to set up the meeting.

For the next day or two I debated whether I should confront my friend Bill about the Mayor’s claim that Bill was pushing for prosecution of a political statement (that is fully protected by the 1st Amendment).  Eventually, I did share the Mayor’s story with Bill and he absolutely denied it.  Then, as he told me later, he called the Mayor and asked the Mayor directly if he had told me that Bill wanted me prosecuted.  Bill said that the Mayor admitted talking with me but denied telling me Bill had pushed him to instigate prosecution.

So, who is lying?

I did follow up with the Mayor’s scheduling secretary and his Westside deputy, Joe Hari and Deputy Mayor Larry Frank, who lives in Venice.  At first, Hari disputed that I had actually spoken to the Mayor.  He went so far as to call the staff who was with the Mayor at Paramount and then called me back to, basically, call me a liar, because the Mayor’s handlers reported that that no one had a substantive discussion with the Mayor before or after his speech at Paramount.  Hari was a bit sheepish when I told him that I spoke to the Mayor at Mozza, not Paramount.

A day or so later I sent another email asking for a reply to my request for a date for the meeting with the Mayor.  Eventually Hari called me and said that there would not be a meeting.  I said that the Mayor had clearly agreed to meet with representatives of our group on the public safety situation in Venice.  Hari said that it wasn’t going to happen.  So, I said that I intended to blog that the Mayor’s staff had interceded and told the Mayor that he shouldn’t meet with us, against the Mayor’s own commitment.  The call ended.  A few minutes later Hari called me back and said that my request for a meeting was in process.  I asked that the Mayor’s scheduler call me to confirm that the meeting was being calendared.  He said he would have her call.  She hasn’t called.

I’ll leave you with the Mayor’s parting comments at Mozza:  “You know, when I leave office, I’m going to move to either Venice or the Pacific Palisades, so I have a personal interest in helping you with this.”

Posted by venice stakeholders at 11:28 AM