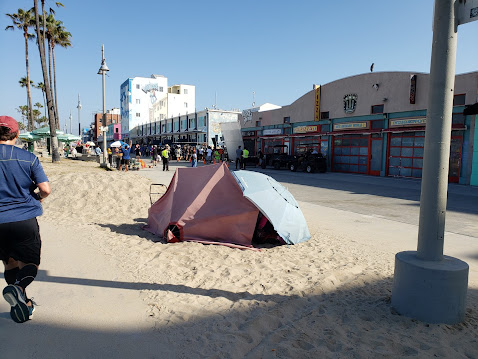 When Councilman Bonin first announced his Encampment-to-Homes project for Venice Beach, I was quoted in the LA Times saying that without a return to enforcement of the camping and tent ban, and the overnight curfew, the encampments would return.

Well, that is starting to happen.  Or not all of the earlier campers were really relocated to housing.  And I think it's the latter.

Last weekend when I walked the beach from Venice Boulevard to the Santa Monica Border, I counted 39 encampments/tents or bedrolls.

This morning I walked it again and counted 42.

I am assured by the LAPD and the Chief Park Ranger that they are engaged in 24-hour enforcement of LAMC 63.44, which bans tents and camping, and also bars anyone from the Venice Beach Recreation Area (Boardwalk to the water) from 2 to 5 AM.

But the presence over several days of this significant number of campers, many still with tents, indicates that, 1. the relocation/housing project has not been completed, and, 2. that my concern about a return of refugee-camp type encampments is legitimate.

While from the Boardwalk, the project can look like a success because most the encampments on the grass next to the Boardwalk are gone, some have just moved out onto the sand or behind a wall, so they are not so visible.

As I have said before, the city has only addressed one side of the equation.  It is like trying to empty a bathtub by only opening the drain, but not turning off the faucet.

The most surprising photo, though, shows the "Cafe Lady," the one who earlier had set up an outdoor cafe in two artists vending spaces at OFW and Rose, expanding her "cafe" this morning with benches. Of course, none of her cafe furniture meets the 63.44 limit of fitting within a 60-gallon city trash bin and she does not have a permit to sell drinks to visitors.

But as usual on my walks I did not see any LAPD officers or Rec. and Parks rangers; so, not only is there no enforcement in the mornings, there is literally no presence of any city authority at all.

After what must be accounted a success in its early stages, it is discouraging not to see the city follow-through and firmly enforce the no camping rule at all hours.
.

Posted by venice stakeholders at 11:06 AM