The count of campers on Venice Beach remains basically unchanged from last weekend, at 46.

The primary difference this weekend is that there was only one tent on the sand.  Sheriff Alex Villanueva should receive credit for this.  He announced at the press conference last week that he had sent his department's Mounted Patrol out to remove all tents on the sand and this effectively has stopped campers from setting up new tents. 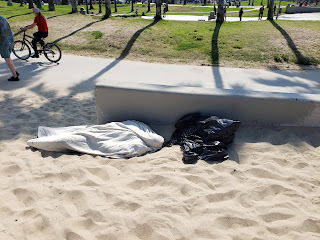 (The County Department of Beaches and Harbors has responsibility for the maintenance and cleaning of the sand areas of the Venice Beach Recreation Area (VBRA), so it has always been within the Sheriff's jurisdiction to keep the sand clear of obstacles that interfere with that task.) 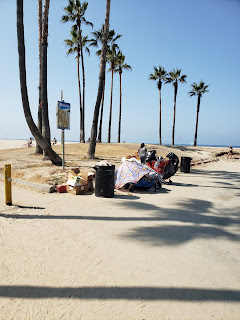 However, all along the beach, in some instances on the sand, there are small encampments of tarps, furniture, suitcases, backpacks and sleeping bags.

The city of Los Angeles has been unable to enforce a "zero" tolerance policy for camping in the VBRA and clear these remaining campers due to lack of staff.

After Councilman Bonin and Garcetti declared "Mission Accomplished" at the beginning of August, the nightly deployment of LAPD, Recreation and Parks, and Dept. of Sanitation staff was reduced to three nights a week and is scheduled to end on August 21st. 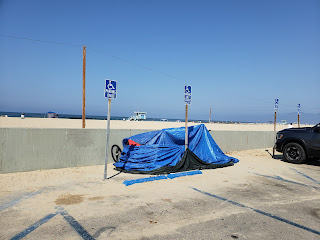 To avoid a re-population of the VBRA with more campers and encampments, the commander of Pacific Division, Captain Steven Embrich, has submitted a request to maintain at least enforcement teams on the beach at the current level of effort - three nights a week.

Posted by venice stakeholders at 12:17 PM